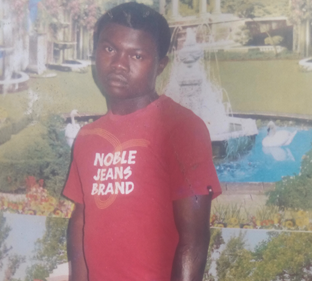 The sudden disappearance and alleged murder of 22-year-old Christopher Ngbede Ameh in police detention in Benue State has continued to raise dust as the family of the deceased is demanding justice.

Christopher, who until his alleged murder was a Higher National Diploma, HND, student of Benue State Polytechnic, Ugbokolo, disappeared mysteriously from police custody and his parents are alleging foul play.

The family says they have reason to believe their son has been extra-judicially murdered or the police produce the young man or give account for his disappearance.

In a petition written by counsel to the father of the boy, Mr. Abel Ameh, to Benue State Police Command, he said the disappearance of Christopher occurred on July 2, 2017.

The petition, which was also addressed to the Inspector General of Police, the Assistant Inspector of Police, Zone 4, Makurdi as well as the National Human Rights Commission, NHRC, pleaded with them to act on the matter in the interest of Justice.

He urged the police to act to save the face of the force by fishing out those who masterminded the disappearance and possible death of his son whom he claimed was innocent of the claims against him.

Ameh said, “We are demanding justice in this matter because it will not only ensure that the true account of what happened to my son is made public, it will also ensure that the bad eggs in the force are fished out.”

Narrating what he said led to the alleged murder of his son, he said, “In July 2017, some youths came to tell me that my son had been arrested for allegedly harassing a young lady with a gun.

“The next day, the police came and searched my house without a search warrant and did not find anything to implicate my son of the said accusation.

“On the strength of that, I immediately went to the Adoka Police Station to bail my son but they refused to grant him bail.

“At that point, I became helpless and didn’t know who to turn to, especially when I gathered that the police had earlier granted bail to two other suspects who were said to have been arrested alongside my son.”

Continuing as he fought back tears, he said, “We later visited the station to give him food but we were told he was no longer with them. I was shocked and couldn’t understand what was going on.

“I inquired about his whereabouts and I was told initially that he had been transferred to the police Area Command Headquarters in Otukpo for further investigations.

“I immediately went to the Otukpo Area Command to see if I could bail him, but when I got to there I was told that there was no such case with them.

“I made efforts to know what was happening but nobody was ready to help.

“When I couldn’t hold back and was in tears, a crime inspector approached me and told me that my son’s case had been transferred to the State Criminal Investigation Department, SCID, in Makurdi.

“I headed to Makurdi only to get there and found that no such case had been taken there and my son was nowhere to be found.

“It was at that point that I returned home in Adoka and decided to seek legal advice because it was obvious that nobody was ready to tell me where the police had taken my son to.”

The father stated that one of the young men who had been arrested with Christopher but released later confided in him that his son was taken out of cell at about 4am and murdered by the police.

According to him, somebody showed him a van that conveyed the corpse of his son to the place where he was probably buried.

“I also overheard people telling a parish priest that my son was involved in a robbery incident and that he had been buried between Adoka and neighboring Ogbobia in Otukpo local government area.

“It is devastating, that is why I’m asking for justice in this matter because a suspect is presumed innocent until found guilty by a competent court.

“We demand explanations. The police should tell us the whereabouts of my son who was in their custody and, if they have actually killed him, they must come out and tell the world why he was killed extra – judicially”.

Ameh, who was still in shock over the fate of his son, disclosed that Christopher was the fourth out of his eight children.

Reacting, the Benue State Police Commissioner, Mr. Bashir Makama, who promised to unravel the circumstance surrounding the disappearance of the suspect, assured that justice would prevail in the matter.

“I have instructed the Divisional Police Officer, DPO, in charge of Adoka to commence investigation into the matter. I will take it up from there”.


Photos: Zahra Buhari and her hubby, Ahmed, attend her sister in-law, Adama’s birthday get away in Spain