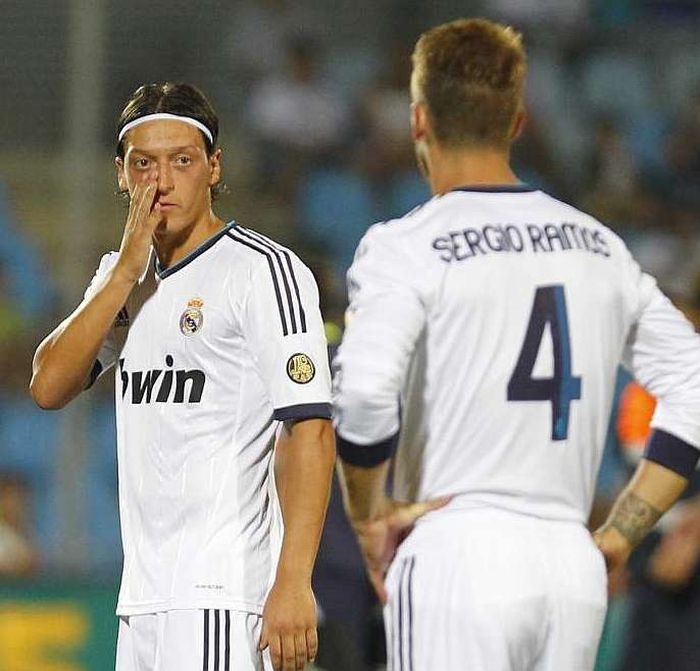 Mesut Ozil has hailed “big brother” Sergio Ramos and claimed that the Real Madrid captain’s never-say-die spirit sets him apart from his peers.
Ozil won one La Liga title and the Copa del Rey during his three years at the Bernabeu, before departing for Arsenalin 2013 for a fee of £42.5m.
“When I was in Madrid, Sergio Ramos lived on the same road and I did a lot with him,” he told Arsenal’s official website. “He was like a big brother to me. He showed me Madrid and helped me to settle quicker, just as Sami Khedira did. He lives in a similar way to my culture, to how I grew up.
“He keeps his closest friends around him and tries to have fun in life, just as I did. We had a great time together back then. We’re still in contact. Of course it’s not the same as before because he lives in Madrid and I’m in London, but we will write to each other now and then.
“He’s not one of the best central defenders in the world or in the history of football for no reason. He just wants to be successful and you see on the pitch that he never gives up, right until the last second where some players might say ‘Oh, it’s over’. But his attitude – he’s always there for the team and I’m pleased for him when he scores goal and is successful.”

I Am Not Dead – Popular Yoruba Actor, Odunlade Adekola Cries Out


Pep Guardiola Reveals How Much He Loves Manchester Food