‘Evans Is Safe In Our Custody’ – Nigeria Police Force 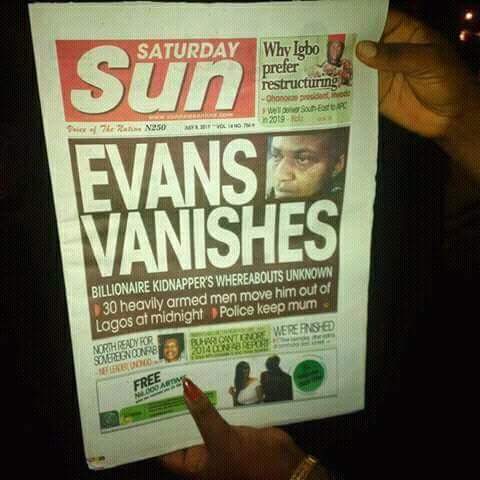 Contrary to the headline above, the Nigeria Police Force, have this to say.
The Nigeria police force has denied media reports that notorious kidnapper, Evans, has vanished from police cell. Earlier today, The Sun Newspaper published a report alleging that the kidnapper who was arrested on June 10th in Lagos, was no longer in Lagos police custody and his whereabouts was no longer known.
READ ALSO : EVANS VANISHES!! The Billionaire Kidnapper’s Whereabout Unknown | Read Details
Denying the reports, the Force spokesperson, Jimoh Moshood who spoke to newsmen this morning, said;
“The media need to avoid stories that could create fear, tension or misrepresentation among the masses. Where did Evans vanish to?
That headline was misleading. The suspect and his accomplices are very much in our custody. We are working hard to ensure that justice is served at the end of the day.
There are certain information that are not for public consumption to avoid jeopardising investigation or even national security. Evans is with the police.
His whereabouts is known but cannot be made public. We are appealing to Nigerians to remain calm and support the police to conclude its investigation.”he said