[BREAKING NEWS!!!] Barcelona Gets New Coach, See Who Their New Coach Is…. 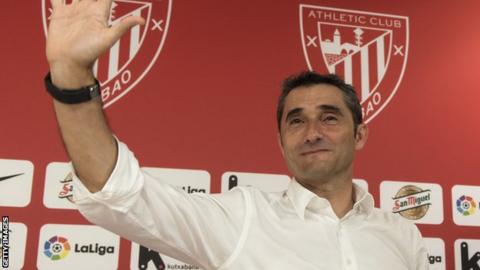 Barcelona have appointed Ernesto Valverde as their head coach on a two-year deal, with an option for a third.
Former Barca forward Valverde announced last week that he was leaving Athletic Bilbao after four years in charge.
He replaces Luis Enrique, who revealed in March that he would leave the club – who finished second in La Liga – at the end of his three-year contract.
Enrique led Barcelona to the treble in his first season, the domestic double in 2016 and the Copa del Rey this year.
They beat Alaves 3-1 in Sunday’s final – his last match in charge.
Barca president Josep Maria Bartomeu praised 53-year-old Valverde’s “ability, judgement, knowledge and experience”, adding: “He promotes young players and he plays the Barca way.”
Valverde’s presentation as Barca’s new coach will take place on Thursday.
Where are the Barce’ fans ?