SO SAD! Star Premier League Striker Confirmed To Be On Missing Plane (PHOTO) 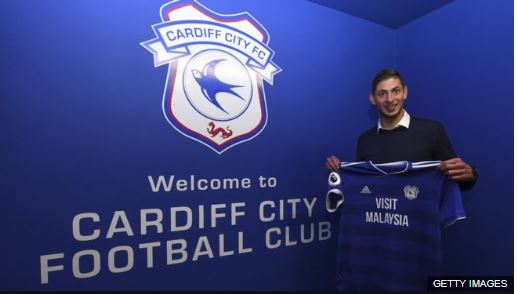 Premier League footballer Emiliano Sala was on a light aircraft which went missing over the Channel Islands.

The £15m Argentine striker, 28, was one of two people on board the Piper Malibu which lost contact off Alderney in the Channel Islands on Monday night.

Cardiff City, which signed Sala from French club Nantes in a record deal on Saturday, said it was “very shocked”.

Guernsey Police said there was “no trace” of the Cardiff-bound flight and his family said they felt “desperate”.

“I didn’t know anything. I couldn’t believe it,” he said. “I’m desperate. I hope everything goes well.”

Meanwhile, John Fitzgerald, chief officer of the Channel Islands Air Search, said the probability of finding anyone alive from the missing aircraft was “reducing very rapidly”.

“I think with the sea temperatures and the sea conditions the chances of finding anybody alive are reducing all the time,” he said.

The plane left Nantes in north west France at 19:15 and had been flying at 5,000ft when it contacted Jersey air traffic control requesting descent, Guernsey Police said.

The plane lost contact while at 2,300ft and disappeared off radar near the Casquets lighthouse, infamous among mariners as the site of many shipwrecks, eight miles (13km) north-west of Alderney.