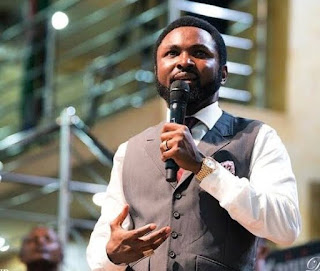 General Overseer of the Abuja based Divine Hand of God Prophetic Ministry Prophet Dr Emmanuel Omale has delivered a woman from a 4 years Kidney Failure and paralysis.

The Prophet in one of his communion services has deliverd one Mrs Nancy Madugu from kidney failure and paralysis which she has spent millions of naira over 4 years. This condition got her paralyzed and was using a wheelchair.

During the communion service Prophet Dr Emmanuel Omale casted out evil spirit from Mrs Madugu’s sister who confessed that she was a python and that she spiritually infected Mrs Nancy Madugu with kidney failure. She further confessed that she did the evil deeds because she was jealous that her sister was too beautiful and also because she had left her to marry.

In a Testimony Service on July 9, 2020 in the church, Mrs Nancy Madugu testified about how Prophet Omale had been used by God to free and heal her from kidney failure and paralysis of over 4 years. She explained that she had been on life supports for over 1 year and that after a sister of hers donated one of her kidneys and transplant done, the transplanted kidney still failed. She also testified with pictures that she had been on wheelchair for 2 years. She was accompanied to the testimony service by her sisters and other family members who authenticated Mrs Madugu’s claims.

Mrs Nancy Madugu said she first heard about the great work God has been using Prophet Dr Emmanuel Omale to do through the Divine Hand of God TV, before a friend took her to the Abuja based church from Kaduna.

She thanked God and danced vey happy to the glory of God.

Watch the full communion service video and get blessed