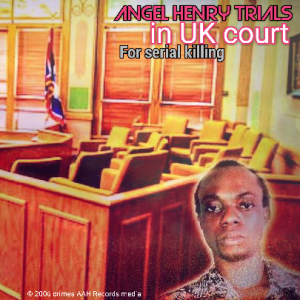 Finally the court granted me bail, as it was written on Facebook profile of Henry Junior Ogar, who is the creator, song writer and character of Angel Henry, on Monday evening; 4th May 2020.The trials which held by digital court trial, an emerging technology already being used in Japan declared the proceedings of the case as a double count charge, and will continue quietly while Angel Henry is allowed to focus on his music career.
The unpopular judge refused to let his identity known to the public for security reasons but passes judgement, saying if found guilty of the charges the accused,  Angel Henry who said he is among the deity of ‘God‘ will be sent to prison until court decides, after he is admitted to a correctional institution.
Homicidal Manslaughter was first defined as the distinction between murder and manslaughter is sometimes said to have first been made by the ancient Athenian lawmaker Draco in the 7th century BC, few years before Angel Henry was born originally, in 12th century BC, according to his biography on Reverbnation website, found on the internet. (Homicide, Wikipedia articles; https://en.m.wikipedia.org/wiki/Homicide)
The penalty for manslaughter is normally less than the penalty for murder. Angel Henry who’s biography read being in existence in the 12th century, will be judged According to that time and modern time, and amended judgement to the present time 2020, about 2000 years ago.
Angel Henry (artist) had just released his single ‘Chocolate‘ in preparation for his elevation album found on YouTube here – https://youtu.be/vsm6IiFm60w before he was apprehended by UK police following his case traced back to 2006. According to the records from Angel Henry’s statement, ‘I filed ageless and denied that the crime was not committed in 2006 and the story have been altered‘, the court adjourns till June 30th, 2020.
Angel Henry asked people to kindly share and like the press release to create interest in the latest development of Angel Henry, as the original reason to the homicide have not been declared, even when confirmed that the incident occurred long ago, and it was a result of unstable mental health, even after visiting correctional institution.
The police also disclosed that it found items as Holy rosary belonging to the Catholics, and a triangular object with an engraved eyes in it, with a note ‘Illuminati is Catholic and Catholic is Illuminati’. The perfume at the scene of arrest was Louis Vuitton, EAU DE Gaga and Angel Henry Fumes.
Angel Henry’s location of arrest was undisclosed, for secrecy purposes following homicide case. The reporter at the scene of arrest also stated that provocative languages were used to describe Rihanna and Beiber such as Rihanna is a demon (she is seen in my thoughts) and Beiber is being used by Devil (he looked like the devil in my thoughts) in a text found on Angel Henry’s android phone.
The android phone was outdated about 30 days and yet to be upgraded to version 10, as the latest Android software is out. She stated that the police were unable to perform certain functions on the phone, the whole contact were wiped and the phone restarted at the push of a button like he was waiting for their arrival.
Before the arrest, local police officers had already put out quiet notice to residents of the New York area in NY state, United States on all holy grounds and entertainment arena. Surprisingly the cops refused to state even the country of his arrest.
However I can’t be guilty at the moment because the victim yet to be disclosed was never seen at the scene of my arrest but I was only told she was dead was his last statement to the press after saying he needs comments, shares and reactions to gain stability in thinking and to keep healthy this difficult time. Thank you.
For more information on this story: Angel Henry’s Homicide, Voluntary Manslaughter. kindly contact Henry Junior Ogar  on Facebook or any related contact to Henry Junior Ogar, the artist Angel Henry. (Angel Henry is a Novel and Web Fiction created for the purpose of entertainment. It falls under the Category of blog fiction (Origin) and it’s genre is being classified as Action, Science Fiction, Fantasy.
Contact details:
AAH Records media
08136739915
lovely4u2k8@yahoo.com