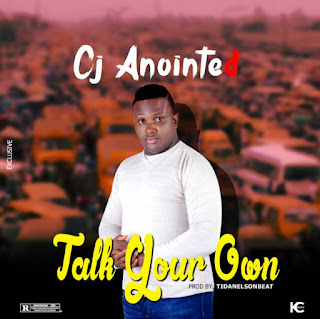 Christopher Joseph popularly known as CJ anointed drops his sensational debut afro-fusion; ” Talk You Own” in this sensitized the masses to fight for their right.

Christopher hails from Akwa-Ibom where the passion as music lover and follower was imbibed. You might as well known that he has other passion like football before stumbling on music as a career.

In this song the artiste use’s framed analysis to examine the dynamic of music, social menace,and politics based on framing and expression he considers music as a tool to convey political message for change that can be canvassed if the masses themselves become the flag-bearer of their right by speaking up.

However, adopting the pidgin words “talk your own” which means; “speak up”, CJ anointed urges the masses to use their social space to publicize and promote an agenda for their right in this era of digitization and social media.

You wouldn’t want to miss out on this one as the vibe is one of it’s kind and message is very clear. It’s a brilliant one from CJ anointed. Enjoy!!!